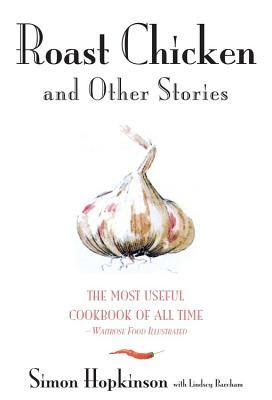 I've been reading a book this past month by Simon Hopkinson, a man I had never heard of until picking up his cook book with additional stories and patter on kitchen wisdom and food opinions. I have had fun reading the recipes and making a few, as I poked along through the book. He's conversational in his writing style and I like that. It's rather like listening to my brother yak about food and experiences he's had in the kitchen and around the world of food. Not intimidating, full of good information and technique tips, sweetly illustrated with a few stories and a few chuckles, full of recipes that are written clearly and not too complicated. The other thing that I really like about the book's recipes is that they are all geared for four servings, which is perfect for a two-person household, a retiree budget, and a small-ish refrigerator.

Read more »
Posted by Susan Lindquist at 8:22 AM 4 comments 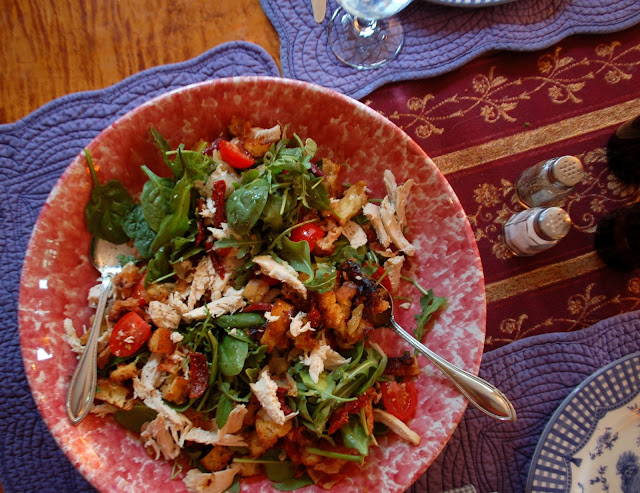 Making this Jamie Oliver salad last evening reminded me of that old expression ... but it tasted really, really good!

Read more »
Posted by Susan Lindquist at 7:25 AM 5 comments 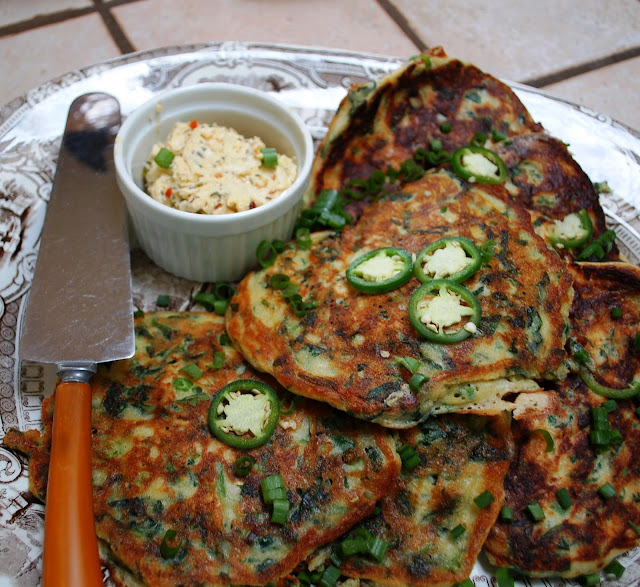 These are pancakes that push the envelope a bit ... this from a Yankee who takes her pancakes seriously.

Read more »
Posted by Susan Lindquist at 8:36 AM 14 comments 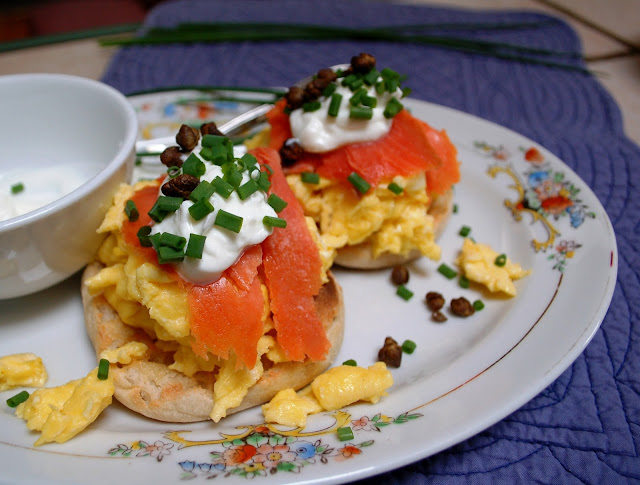 This week's IHCC options are wide open, as it's Pot Luck Week. While the other die-hard cooking club members may be sticking to Yotam Ottolenghi's recipes, I am still having fun with the idea of exploring the other chefs that the club has sponsored over the past couple years. Today, I decided to explore Jamie Oliver's archives on his website ... 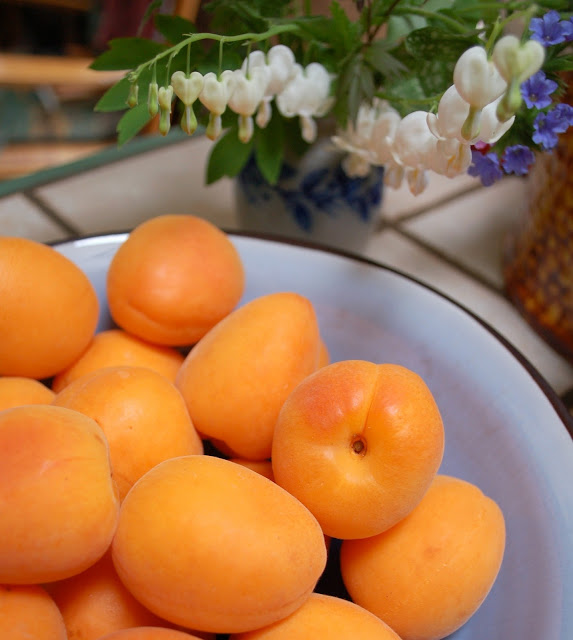 When I was a sprout, my parents dutifully deposited me at the door to Mrs. Abrahamson's Sunday school class every Sunday morning. Mrs. Abrahamson was the picture of the soft and gentle Methodist maven. She came complete with a bag of multi-colored ribbons for awarding when we wee folk learned our Bible verses,  a Brownie camera for taking adorable pictures of us as we completed various class activities, a large box of graham crackers and two cans of apricot nectar for our Sunday school snack (kiddie communion). Golly, she was a peach! I guess I can't say she was an apricot of a gal, but she was my first exposure to apricots.

Read more »
Posted by Susan Lindquist at 10:02 AM 9 comments 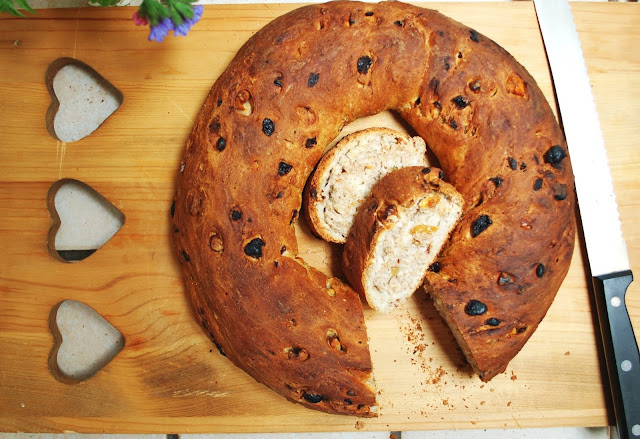 Baking bread is one of the most satisfying of baking ventures and it seems that Dom, our dear friend over at Belleau Kitchen, has tapped his inner baker and become a blogging bread fiend! Well, he's in good company here! In fact, when he suggested that May's Random Recipe challenge was to collect one's bread baking books and randomly choose a bread recipe to make and post, I was pretty excited! I only hoped that I would choose a bread recipe that was new and untried! Score! 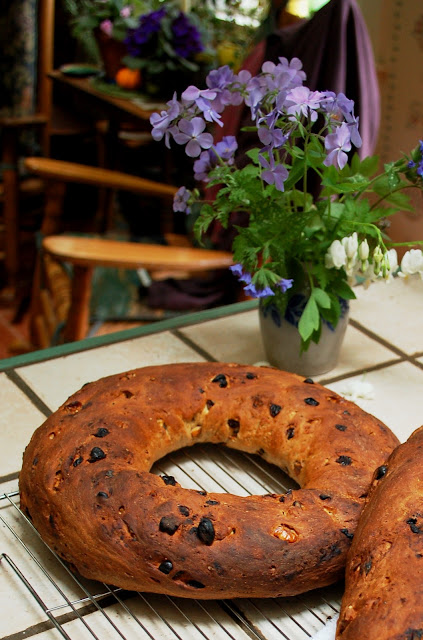 This French recipe comes from Paris Boulangerie Patisserie, Linda Dannenberg's excellent book of recipes from the most famous and well-established bakeries in Paris. On opening the book to a random page, I  was greeted by a raisin and walnut bread that comes from the countryside in the southeastern region of France. This bread had me doing something I have never done before in my bread baking. It calls for making a yeast starter dough called Pâte Viennoise and letting it rise for 45 minutes. Then, another dough is made that incorporates the starter dough in during the kneading process. This white wheat flour starter combines with the second rye and wheat flour mixture to make a striated dough, rich with butter, raisins, currants, walnuts, and a bit more sugar than usual ... really a beautiful combination! 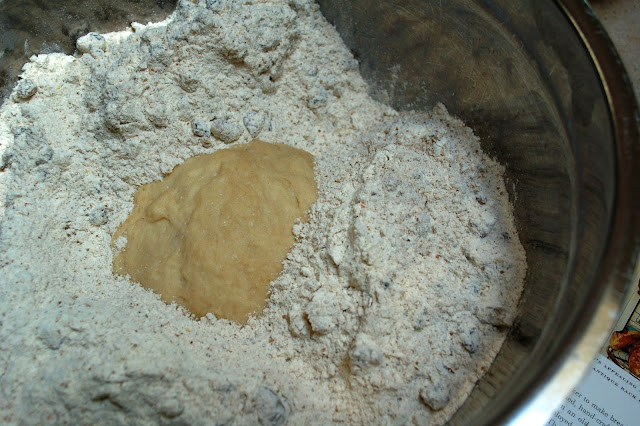 Read more »
Posted by Susan Lindquist at 8:21 AM 7 comments

We Should Cocoa - Mango Chocolate Mousse

It couldn't get any easier than this ... a blender mousse that's healthier than the traditional version! What's not to love? I happened upon this recipe when I was searching for chocolate pudding recipes ages ago ... it has lingered on my 'favorites' bar for weeks. I found another chocolate pudding recipe for a pie that I needed to make, but this mango chocolate concoction sat patiently waiting. The chocolate cream pie has come and gone, but I still yearn for a small bowl of creamy custard goodness now and then! 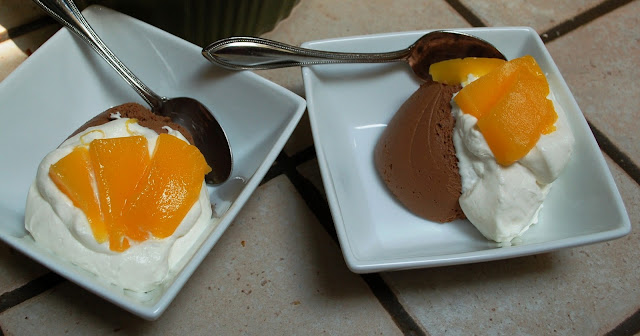 Read more »
Posted by Susan Lindquist at 8:23 AM 2 comments 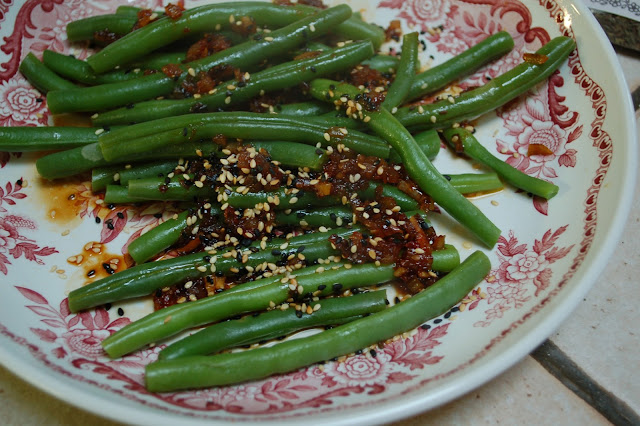 A fast post for an easy green bean side ... beans are starting make the appearance in the produce markets. They are bright green and firm and perfect for a fast steam with an easy spicy topping ... enjoy! I made pork lo mein last evening and these beans sat alongside as a hot spicy counterpoint to all those slippery saucy noodles and pork strips. Heaven to our starving garden work-weary bodies!

Read more »
Posted by Susan Lindquist at 9:42 AM 3 comments

My Spring Gift to You! 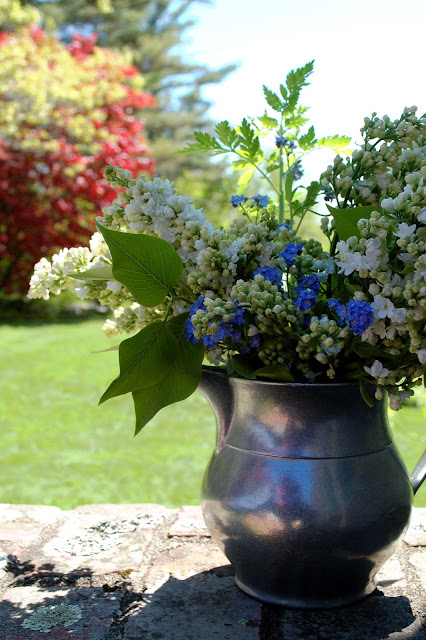 I hope your week is going beautifully !!
I couldn't resist sending you some posies, dear friends!
Happy Springtime!
Happy Weekend!

Posted by Susan Lindquist at 10:40 AM 4 comments 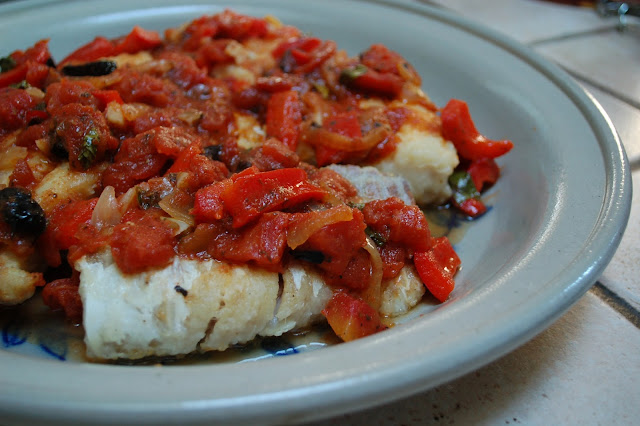 This is no delicate seafood dish. No, this is a plate of food for a night when you're craving a hearty glass of wine, a substantial meat and vegetable plate with juices worthy of a thick crust of bread. This French recipe requires a thick meaty fillet of fish - no sole or perch, but a fat slab of cod or hake or pollock. I used cod and pollock.

The rest of the dish consists of good chunky oven roasted tomatoes (canned or fresh during the summertime!), some onions, garlic, black olives, white wine, and herbs. Start the tomatoes as a sauce and dredge the fish fillets in flour and salt and black pepper. Fry the fish briefly in very hot oil, then pat the fillets with paper towels to soak up some of the oil. Lay the fish in a shallow roasting dish, drizzle the hot tomato sauce over top and bake in the oven for 10 to 15 minutes to finish the fish. Scatter on some pretty green thyme sprigs and capers.  Have a good crusty artisan bread and a cold green salad waiting and pour the wine. This is good basic food that reminds me of seaside inn fare on Cape Ann; Provence may be in the title of the recipe, but this dish screams the coast of New England to me.

Read more »
Posted by Susan Lindquist at 7:53 AM 2 comments 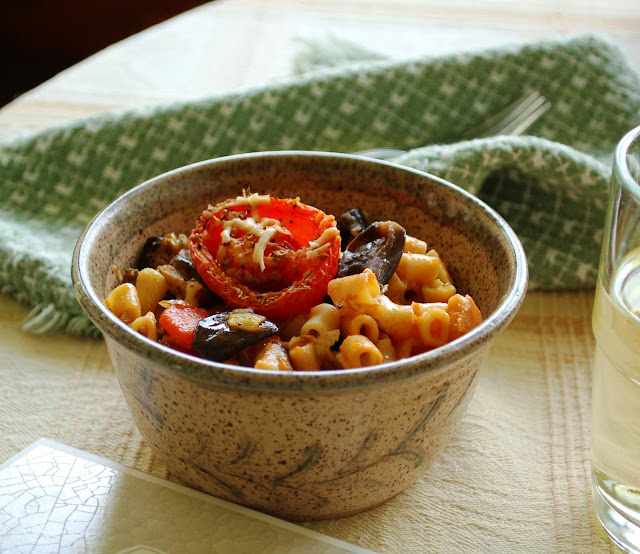 Chef Ottolenghi calls this pasta bake 'luxurious' - the semi-fried carrots, celery, and eggplant give the pasta a nice edge. Ottolenghi's recipe calls for orzo pasta, but I prefer a bit more bite to my pasta so I opted for ditalini, little short tubes of macaroni. The neat thing about this recipe is that the pasta is rinsed and then cooked in the baking dish with olive oil, broth, the vegetables and their juices, and tomato paste. This process does make the flavour silky and yes, luxurious! Must be the starch from the pasta that makes the resulting sauce around the pasta and vegetables so silky! Put some cheese into the blend, oregano and thyme sprinkles on the tomato slices atop it all and you have one jazzy pasta and vegetable casserole!


Read more »
Posted by Susan Lindquist at 8:10 AM 6 comments

Derby Pie and a Funky Hat 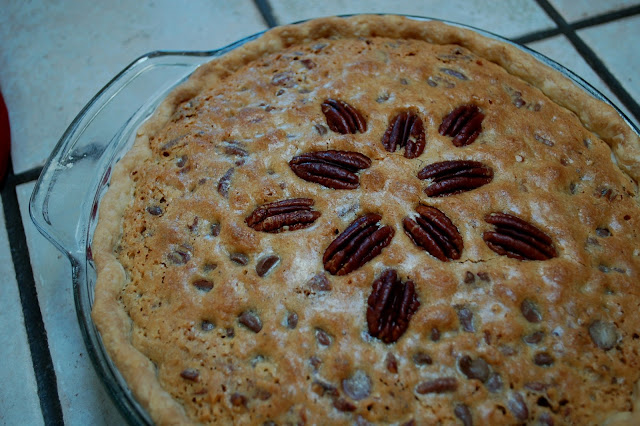 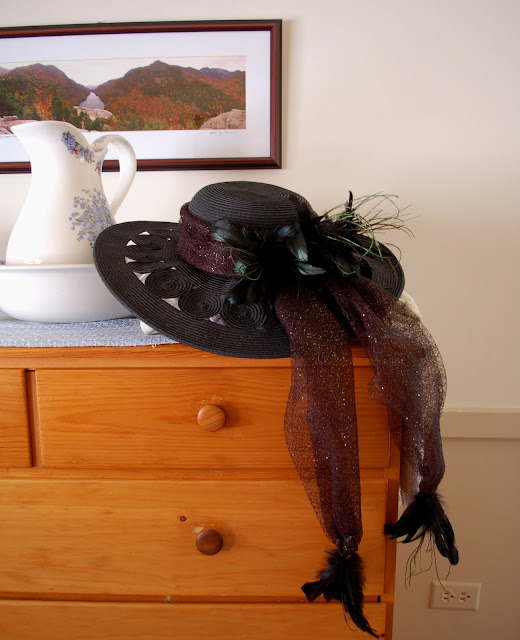 
This past weekend, SB and I put on our funky hats, crammed a few dollar bills in our pockets, made a decadent dessert and headed out to Mary and Bill's place for a Kentucky Derby Party. We were greeted at the door with the soft instrumental strains of 'My Old Kentucky Home', handed a mint julep, introduced around to new friends and urged to greet 'the old regulars'. Then, things got seriously fun!

Read more »
Posted by Susan Lindquist at 11:09 AM 5 comments

Okay, so THIS is what sunlight does blasting down through my skylight onto the sauce base for today's dinner - Barley Stuffed Cabbage Rolls with Pine Nuts and Currants. I'm drooling already, aren't you? Wait til you see this platter all decked out! 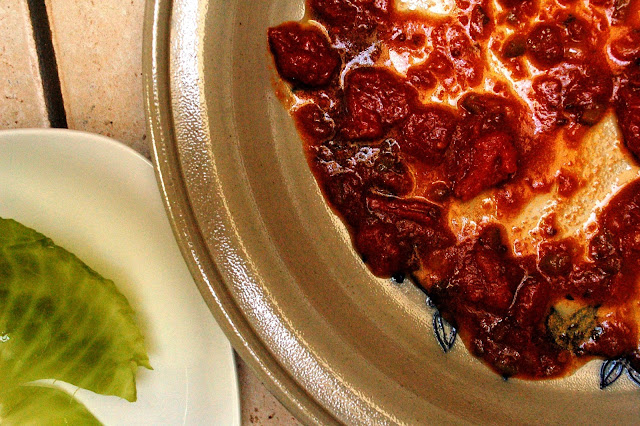 Read more »
Posted by Susan Lindquist at 9:37 AM 8 comments 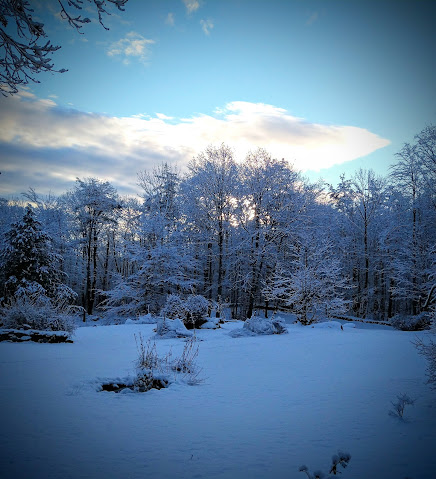