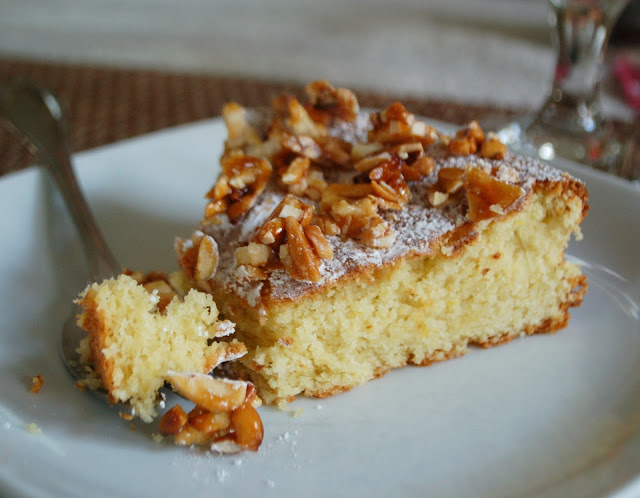 It's been a while since I've baked with any regularity, as both SB and I have been trying to limit sweets. Today, though, I missed our tea time treats, so I pulled out the spring form pan and made a lemon torte. While it baked, I found an easy recipe for sugared almonds that is reminiscent of peanut brittle. It has far less sugar though!

By the time the torte came from the oven, the almond brittle had cooled and was ready to break into bite-sized bits. A sprinkle of confectioner's sugar and a crumbled topping of the brittle made for a pretty cake! This torte is made with almond flour and meringue. Lemon zest and juice make for a bright citrus flavour. Easy and ready in time for afternoon tea! 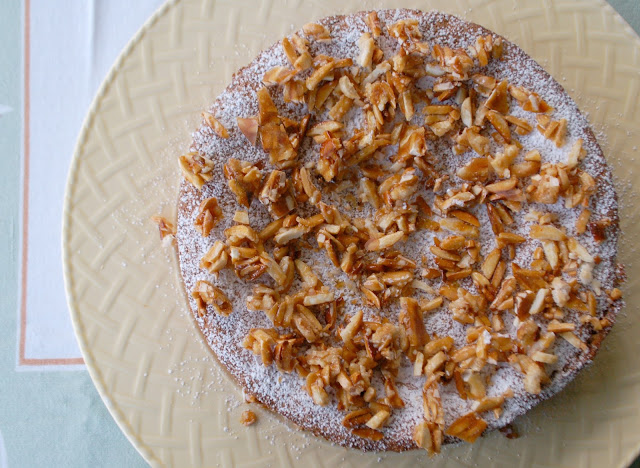 1. Pre heat oven to 350 degrees F. Butter the sides and bottom of a 9-inch springform cake pan. Place a parchment paper circle in the bottom of the pan. Set aside.

2. Separate the eggs. Place the yolks in a deep mixing bowl and add half the sugar measure. Set the egg whites aside in a clean cold mixing bowl.

3.Whip the egg yolks and sugar until frothy and light yellow. Add the lemon zest and lemon juice and stir to combine.

4. In another small bowl whisk together the almond flour, baking powder, and cardamom. Add it to the egg yolk mixture and mix until smooth ... batter will be quite thick.

5. In a clean cold bowl, whisk the egg whites with the vinegar and a small pinch of salt. When the whites are bubbly and starting to become foamy, start sprinkling in the other half of the sugar measure. Whisk briskly until stiff peaks form and all the sugar has been added.

6. Fold the egg whites gently into the batter. Add about a third at first and fold in to loosen the batter a bit. Then, add another third and fold in , then the last third.

7. Turn the batter into the pan, being careful not to deflate the loft of the batter. Bake in the center of the oven for 35 minutes.

8. When the torte is baked, let it cool for ten minutes, then run a knife around the outer edges of the torte, release the spring form rim, and gently tug the parchment paper to pull the cake to a pretty platter (I cut a small tab on the parchment circle so I can peel it from the side of the torte and pull it more easily to its platter.)

9. Cool the torte completely. then sprinkle the top with confectioner's sugar and sprinkle almond brittle to top the torte.

1. Melt the butter in a small non-stick fry pan.

2. Add the almonds and toss them in the butter until beginning to take on some golden color.

3. Add the sugar and stir to melt the sugar. let it bubble up and begin to thicken a bit.

4. Turn the nuts onto piece of parchment paper and let them cool and harden.

5. Break them up into bite-sized bits. 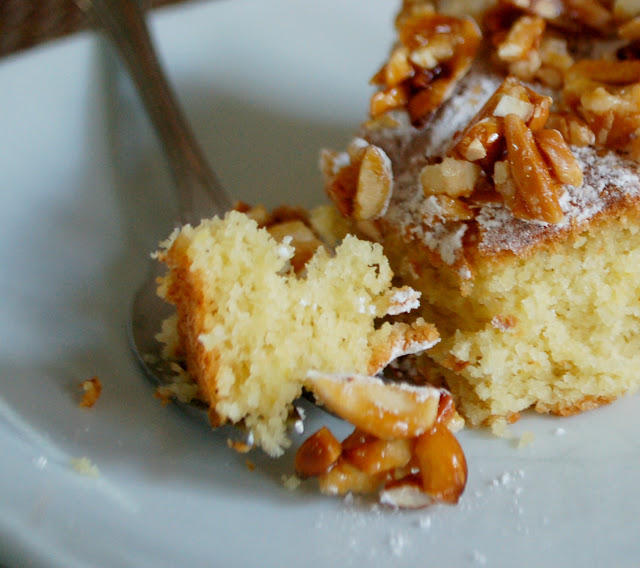 Posted by Susan Lindquist at 9:58 PM