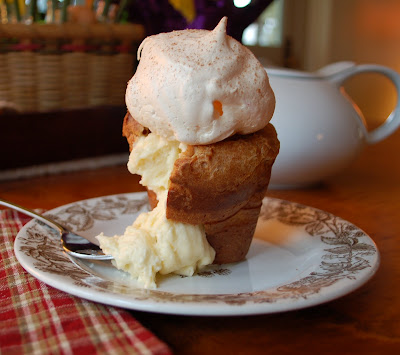 ﻿
The April 2011 Daring Bakers’ challenge was hosted by Evelyne of the blog Cheap Ethnic Eatz. Evelyne chose to challenge everyone to make a maple mousse in an edible container. Prizes are being awarded to the most creative edible container and filling, so vote on your favorite from April 27th to May 27th at http://thedaringkitchen.com/ ! 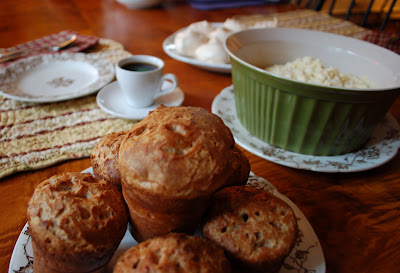 some assembly required ...
Okay folks, this is my second time through the gate with Daring Bakers. I was really excited about making a maple mousse (required element) and thought about a kazillion ways to present it in some sort of edible vessel ... I played with lots of ideas, but kept returning to the maple flavor/French toast connection. Lots of posts lately have had a bacon and maple thing going on, but sorry, I won't go there with a bacon bits bedecked bit of decadence. I have to admit, though, I did think about trying to do a salty/bacon flavored meringue to complement whatever I came up with ... but, no. Not this time.

So... how about a sweetened popover with that mousse pushed into the warm cavity and a pretty cinnamon sugar meringue sitting atop? I thought it a brilliant idea! A little warm, a little cool, a little cinnamon, a little maple, a little like French toast with a Frenchie twist ... brilliant, right? 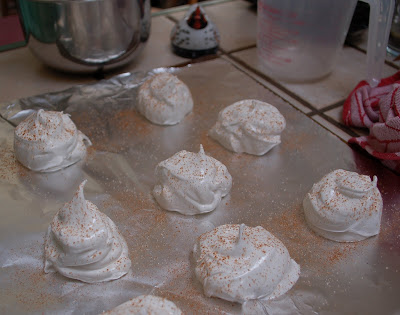 sweet meringues sprinkled with cinnamon and sugar
Sweet Meringues﻿
Ingredients:
3 egg whites
3/4 c. sugar
cinnamon and sugar for sprinkling
Making the Meringues:
1. Pre heat the oven to 300°Fand place a sheet of foil or parchment paper on a cookie sheet.
2. In a deep bowl, whip the egg whites until foamy.
3. Gradually add the sugar and whip until the whites become stiff and peaks stand up and are shiny.
4. Place dollops of meringue onto the lined cookie sheet, sprinkle with cinnamon and sugar, and pop into the oven. Immediately reduce the heat to 250 °F set the timer for 45 minutes.
5. When the timer rings, turn off the oven and leave the meringues in the oven to cool and dry for a few hours.
Maple Mousse

1. Bring maple syrup to a boil then remove from heat.

2. In a large bowl, whisk egg yolks and pour a little bit of the maple syrup in while whisking (this is to temper your egg yolks so they don’t curdle).

5. Whisk the gelatine/whipping cream mixture into the maple syrup mixture and set aside.

6. Whisk occasionally for approximately an hour or until the mixture has the consistency of an unbeaten raw egg white.

8. Remove from the fridge and divide equally among your edible containers.


Made the mousse, made the meringues, looked at the chilled mousse ... had a cow! 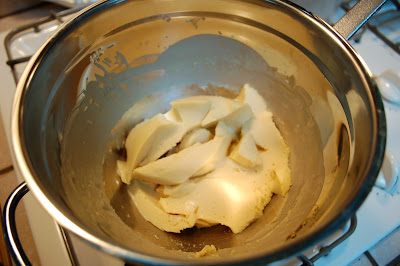 the brink of disaster ...
The mousse was like so much rubberized latex sitting in the bottom of the cold mixing bowl. The frothy whipped cream had collapsed completely. In my frustration to gauge how the consistency was throughtout, I hacked at it... alas, a total failure. But, wait!, I thought. Maybe I can salvage said mousse! I AM a Daring Baker, after all! And before I invest the energy in making the popovers, I have to see if I can get ten dollars worth of maple syrup and so much gelatin to play nice with some more whipped cream ... nothing ventured, nothing gained (or lost)! The maple flavour will be a bit diluted by the addition of more whipped cream, but that's better than pitching that beautiful syrup! 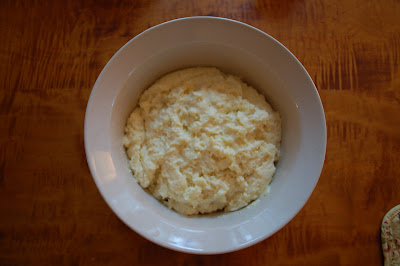 not as smooth as I would have it, but ... great taste
By the way ... is this against the rules? I made the mousse by the recipe, but in order to salvage I stepped out into space. Hmmm. Insert a Star Wars type bit of humming in here, please...

So, here's what I did to salvage said mousse ... I put the bowl over a simmering hot water bath and stirred it until the gelatin melted, whisked it to get it really smooth and then chilled it gently in a cool water bath. I whipped another cup and a half of cream and then gently folded the just warm maple gelatin mixture into the whipped cream. Then I chilled it again after praying to the kitchen gods.

One hour later, the mousse had set up and it was no where near as stiff as before ... the only thing is it looked curd-like because I didn't whisk the whipped cream in ... I was too scared I'd collapse the cream too much if I did.

Once I tasted the mousse and found it yummy and soft, I made the popovers, using this recipe. 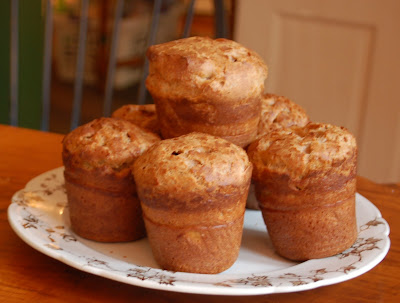 Dessert Popovers﻿
Ingredients:
1 c. flour
2 tbsp. sugar
1 tsp. cinnamon
1/2 tsp. salt
1 c. whole milk
1 egg plus 1 egg yolk
1 tbsp. melted butter
Making the Popovers:
1. Pre-heat oven to 425 °F and generously grease the popover pan containers.
2. Whisk the dry ingredients in a deep mixing bowl.
3. Measure the milk into a separate bowl, add the egg and egg yolk, and whisk until the egg is incorporated.
4. Add the melted butter to milk/egg and whisk.
5. Add the wet ingredients altogether to the dry ingredients and whisk until smooth.
6. Quickly pour the batter into the popover cups, filling half way.
7. Pop them into the hot oven and set the timer for 15 minutes.
8. When fifteen minutes has elapsed, decrease the oven temperature to 350°F and set the timer for 20 minutes.
9. Remove the popovers when they have puffed up and gotten golden brown. Let them rest for a couple minutes in the popover cups and then run a knife tip around the edges and remove them to a plate.
10. Serve while warm.

11. To assemble maple mousse filled popovers, use a sharp serrated knife to make a slice across the top of the warm popover, tilt the popover open and spoon three large spoonfuls of mousse into the cavity. Top with a cinnamon sugar meringue, and serve immediately with strong black coffee or tea. 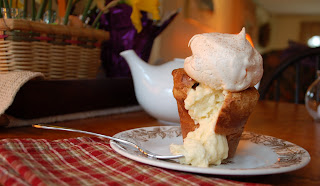 Thinking about this challenge: Loved the idea of the mousse, but I still can't think of what I did wrong. Perhaps the maple gelatin was too hot when I folded in the whipped cream? Perhaps I mismeasured the gelatin powder? Perhaps I mismeasured the whipped cream? I'm at a loss there, but I'm glad I brought it back. I was worried and frustrated! All's well that ends well, though!
Posted by Susan Lindquist at 2:00 PM 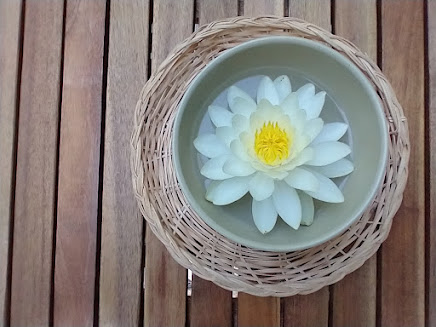