Lidia Bastianich is such an inspiration! Her roots may be in Europe, but she has embraced the American dream whole-heartedly. Her family came to the United States after WWII, sponsored by Catholic Charities, and worked hard to establish themselves. Lidia married, raised a family, apprenticed in restaurants to learn her cooking craft, and built her career step by step. She has maintained a tight family that works together to establish critically acclaimed restaurants, run cooking classes, host television shows on Italian cuisine, and develop the family name 'brand' through cookbooks and affiliation with various commercial ventures. Now THAT'S fulfilling the American dream, huh? Right on, Lidia! 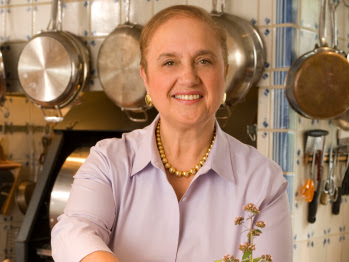 ﻿
She is so deserving of a spot on Gourmet Live's list of 50 Women Game-Changers.... but that's enough gushing. Lidia also has some killer recipes on her website. It was such a hard decision, choosing one recipe to highlight her work. I have settled on a rather time-consuming one, as I have time on my hands this week.
Lidia's Braised Stuffed Cabbage Rolls 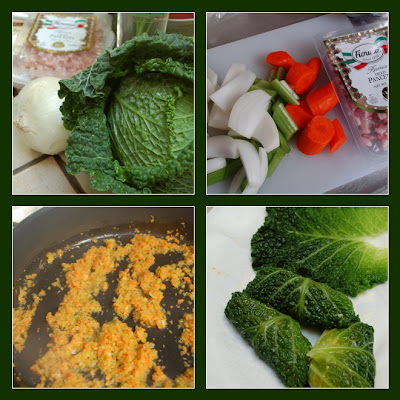 main ingredients minced and used to make the sauce and the stuffing for the little cabbage rolls
I will admit that I had to read this recipe (right click the link above to open in a new window) two or three times to get the three components of the dish right in my mind. It must have been a spacey week for me, as I have been 'off in the stratosphere' all week long.  BUT ... after reviewing the steps and halving the recipe, all came out fantastically. There are four preparations involved in making this dish, the pestata that serves as a base for the cabbage rolls' stuffing and the vegetable-based sauce, the stuffing itself, the sauce in which the rolls are braised, and then the cabbage rolls. It was a labor of love, but man, was it worth it! 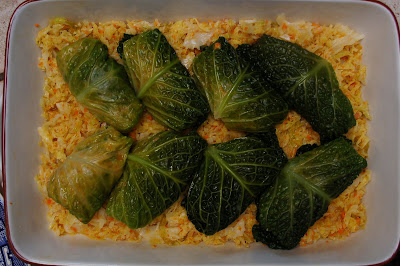 Polpetta di Verza on the simmered cabbage sauce and waiting for the chicken stock braise
When I made this dish, I prepared the dish up to the point of pouring in the chicken stock and braising it in the oven for an hour and a half. That's a nice break between prep and sitting down to eat. 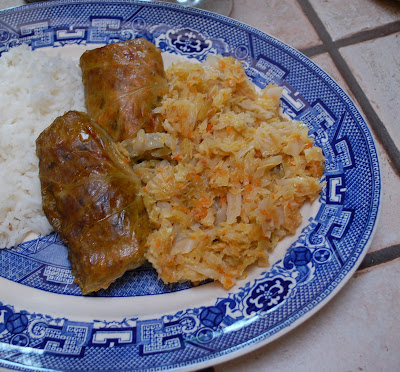 ... cabbage rolls perfectly caramelized on top, warm and creamy sausage filling, a tangy cabbage and sauce on the side ... all that's needed is a pat of butter and salt and pepper on that rice ...
I have always wanted to make cabbage rolls, but have been intimidated by the tomato-based version of cabbage rolls. This blogshare was just the motivation for me to complete a 'little goal of mine' - thank-you, Lidia and Mary!
I had steamed rice and sliced tomatoes with basil ribbons, salt, and black pepper to accompany the cabbage rolls and sauce. There was more than enough for dinner with a friend. We had leftovers for lunch the next day. I cannot tell you how great these were! If you like a tart and savory cabbage, this is the dish for you. We loved the cabbage roll filling too. The sausage and that bit of olive oil melds really well with the pestata, egg, bread, and hint of Parmesan cheese to make a really smooth and creamy filling for the cabbage. Prima!
I wonder what everyone else is making to honor Lidia Bastianich, this week's #12 on Gourmet Live's list of 50 Women Game-Changers. Please follow me as I head up to Mary's link and check out all the other posts! And ... come join us as we cook our way through this list of remarkable women!
Posted by Susan Lindquist at 7:54 AM