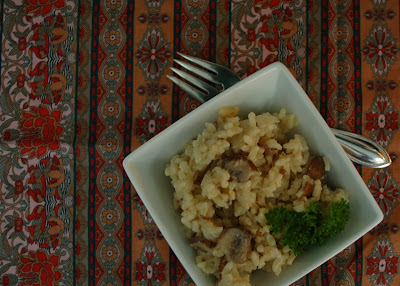 Paula Wolfert and I go back a ways ... I first heard of her when I began using clay-pot techniques and pottery to make fish stews and tagine recipes a couple years back. I bought her cookbook Mediterranean Clay Pot Cooking and never looked back. She has good solid instincts on writing recipes so that they are clear and sequenced nicely. I have read somewhere that that is one of her claims to fame ... that, and her encyclopedic knowledge of the rustic cuisines of the Mediterranean cultures. 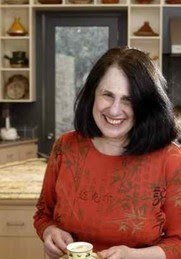 The other evening I prepared her Risotto with Wild Mushrooms and White Truffle Oil. It's funny how the stars were aligned on this recipe. My friend Devaki sent me a precious bottle of white truffle oil at the end of the summer and I have been waiting for two things ... my daughter to send me the recipe for Mushroom Macaroni & Cheese with White Truffle Oil (hint hint!) and the fall harvest of scallops to begin. You see, I love bacon- wrapped scallops served on a bed of mushroom risotto! ... So, blogging on Paula Wolfert during Thanksgiving week gave me the perfect opportunity to have a seafood-based meal in the midst of all this turkey and to share Paula's risotto recipe! It from my cherished cookbook of clay pot cooking for this week's 50 Woman Game Changers blogshare!  To boot, the scallops were right out of the north Atlantic ... so good! 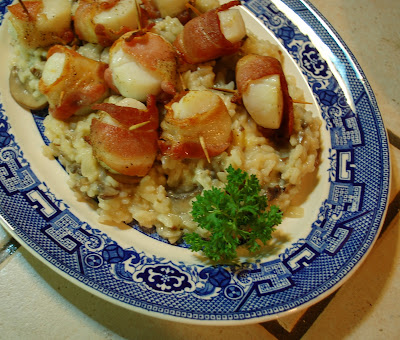 Paula lived in Morocco for many years back in the 70's and 80's and learned so much about the cuisine of Northern Africa, the Middle East, Eastern Europe, Spain and southern France that she compiled a few cook books on these foods. Over the years, she has visited small villages in rural regions to collect the best of rustic recipes to share. Her books give wonderful advice on the proper clay pots to use to make the most of the ingredients in her shared recipes. This cookbook is a really good source ... now, to the risotto. 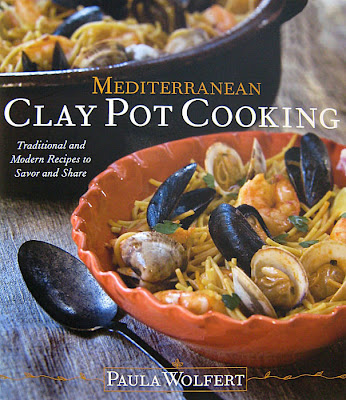 My batch of risotto was a milder version than Paula's more earthy version. I made it to have with seafood, but her version would be my choice for a lunch entree or to accompany dark meats. Both ways are wonderful ... and the technique is classic ...I used some beautiful dried chanterelles and basic white and Crimini mushrooms to make my version. I also used a bit of Mascarpone cheese with the Fontina and left out the butter. Plus ... I started with a quarter teaspoon of Devaki's white truffle oil ... the flavour is so strong that one must be delicate with the truffle flavour. As my mother always said, "You can always add a bit more, but you can't take the flavour out if you overdo it from the get-go!"  My mother is a wise woman .... I added a few drops more, but that was it!

2. Wipe off the fresh mushrooms, trim off the stem butts, and slice them about ¼-inch thick.

4. Add the chopped cèpes, a pinch of salt and a couple tablespoons of the broth. Cook until the liquid has evaporated – 1 to 2 minutes.

5. Add the fresh mushrooms and cook until the moisture has evaporated – about ten minutes.

6. Add the rice and toss to coat with the oils and juices, letting the rice toast lightly for 2 to 3 minutes.

7. Add the white wine and toss until the wine has absorbed.

8. Now add 1 cup of the simmering broth at a time, stirring frequently until it is almost absorbed. Then add another cup, and so on and so on until the risotto is puffed and the rice kernels have a soft bite with just a bit of firmness at their core.

9. Reduce the heat to low and add the cubed cheese, stirring to melt the cheese.

10. Add the white truffle oil and butter, stirring to incorporate the flavours and serve piping hot.

Posted by Susan Lindquist at 1:39 PM