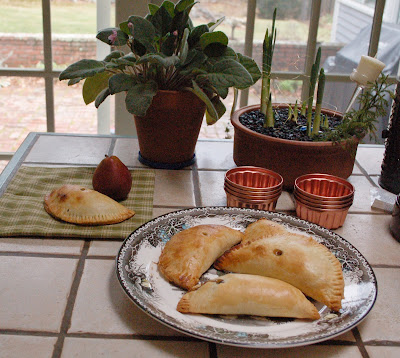 Today's lunch in the grey cottage was a delicious and lazy affair...  grab a hand pie and knosh while puttering away at this and that. 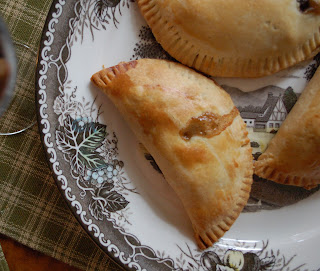 Okay, if you didn't know the title on this post, wouldn't you think this was just another fruit turnover pastry ? Silly you! This is how things started today. 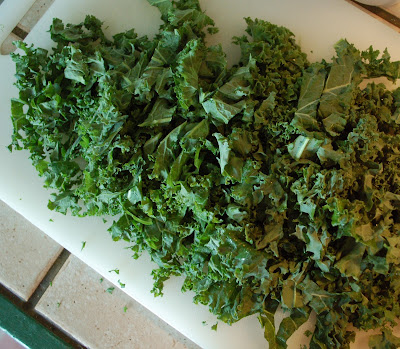 A bunch of kale that was in great need of being used before it went yellow was looking me in the face when I opened the door for my morning coffee's cream. A packet of ground venison meat was thawing on the drainboard. A few apples left from our last trip to the orchard were taking up space on the counter. They all fit nicely with a Martha Stewart recipe that I'd seen in a magazine a while back. So I fooled around in the kitchen for the morning and by lunchtime, we had venison handpies and glasses of wine. 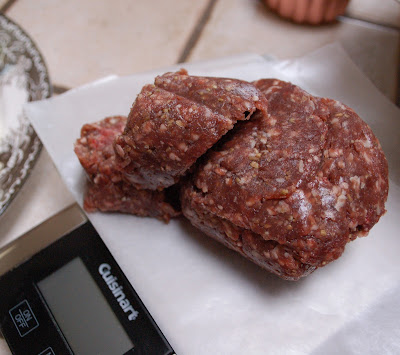 Venison is such a lean meat that I opted to make a savory gravy to keep the pie filling wet and help it to stick together. Flavourful and helpful when you're assembling the hand pies... the crusts are just a butter-based dough that gets whizzed together in the food processor. Easy. So ... the filling ... 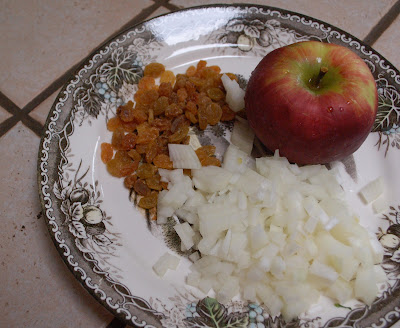 You prep the kale and set it aside, chop the onion and apple into small dice and have them ready on a plate with the sultanas. 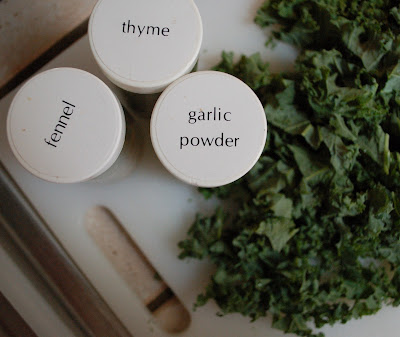 Have the spices ready to add to the mince saute. Go easy on the salt in this recipe. The crust has salt in it and the broth has salt, also. Pepper, however? I am a fan of black pepper, so a liberal sprinkling at the right time can do no wrong! 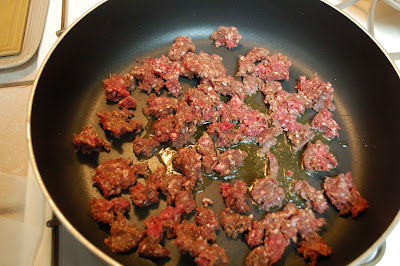 I know this is a boring photo, but I really wanted you to see just how lean venison is. It's crucial to add a bit of olive oil to the pan so that the meat will sizzle and not just dry up ... use Italian sweet sausage if you must, but if you can snag some ground venison, go for it! I was feeling all old-fashioned, as I made this recipe. It's reminiscent of mincemeat with the apples and spices, and the meat mince ... not the authentic stuff, but tasty and in the same vein. 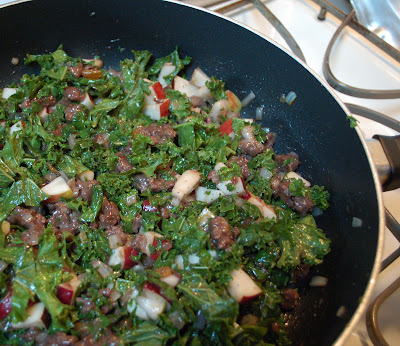 So, here's the filling with the kale wilting down, but it still needed something ... so I added a sweet secret ingredient. 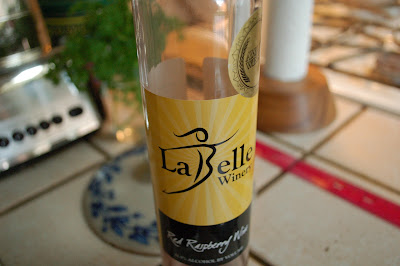 This is my shameless plug for a local winery that I think has great potential! We had this red raspberry wine a few weeks ago as an accompaniment to a dessert course ... there was just about a half glass in the bottom of the bottle, so I added it to the apple and sultanas to offer a bit of sweet support against the tang of the kale and spice of the venison sausage. Pretty perfect ... 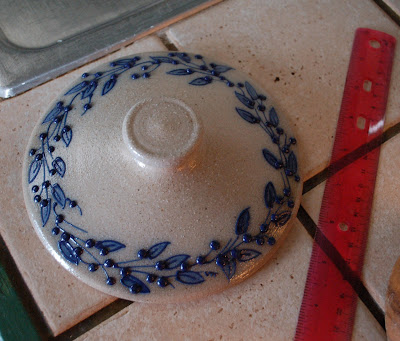 So while the filling cooled and the crust chilled in the fridge, I scouted for a circular template ... pretty and perfect ... the top of one of my beanpots! 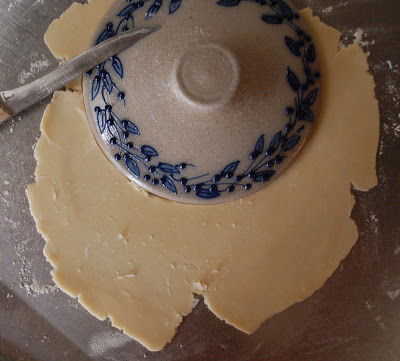 Preheat the ovens, roll out the dough, cut the circles, and lay them on parchment-lined sheets. 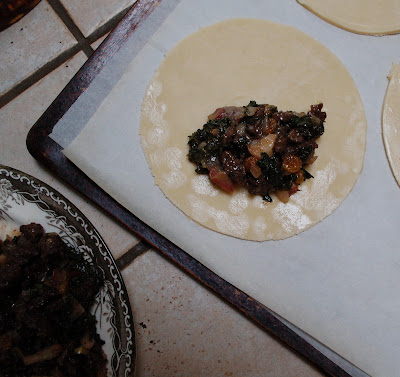 Divide the cooled filling evenly among the crust rounds, brush the edges of the crust with water so they seal well, and fold them over. 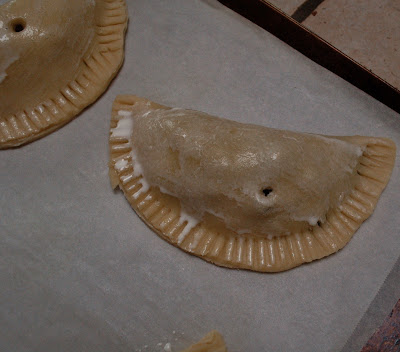 Crimp them closed with a fork, brush them with cream, and pop them in the pre-heated oven for 20 minutes. I broiled mine for an added 2 - 3 minutes to get them golden brown. I watched them like a hawk ... 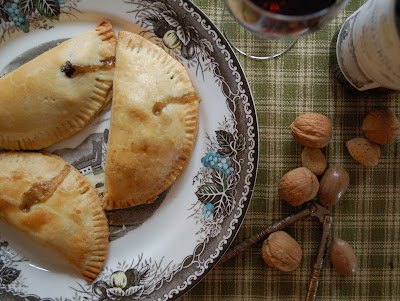 Get it? Bird's eye view ... don't hate me. We have been knoshing them off and on all afternoon. They came out really well ... 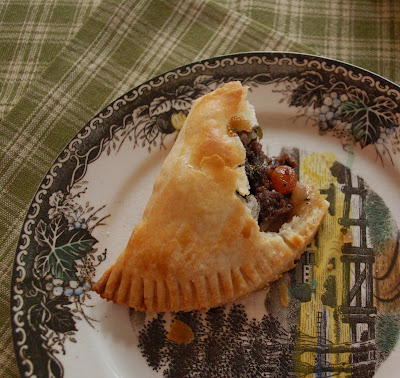 They might be just as good as the venison tenderloins with blueberry and red wine reduction that we had last week, but this time I'm giving you the recipe.

Making the Crust:
1. Place the flour, salt, and butter bits into a food processor bowl and pulse until the mixture is crumbly.

2. Add ¼ c. ice water and whiz until the dry mix begins to come together into a rough dough.

3. Add 1 tbsp. ice water at a time until the dough rolls away from the sides of the bowl and into a lump.

4. Turn the dough onto a large piece of plastic wrap and close tightly. Refrigerate for about half an hour while you make the pie filling.
Venison, Kale, and Apple Hand Pie Filling Recipe -

2. Add the olive oil and ground meat breaking it into small bits as you go.

3. Toss to brown and then add the onions, continuing to brown until the onions are softened.

4. Add the cornstarch to the broth and make a slurry. Turn it into the pan and lower the heat a bit. Stir in to make a thickened sauce.

5. Add the red wine and stir to combine.

6. Turn in the apples and sultanas, stirring to coat them with the sauces.

7. Lay the chopped kale atop everything, cover and let the kale wilt abit. Take the top off in a few minutes and stir everything together. Return the cover and cook just until the kale is softened a bit.

8. Turn the mixture onto a large plate and scrape the pan to get all the juices and sauce. Let the mixture cool completely. Correct the salt and pepper seasonings.

Preheat the oven to 400° F and line two cookie sheets with parchment paper.

Take the chilled dough from the fridge and divide it into eight equal lumps.

Prepare a lightly floured surface and roll out the lumps to about ⅛ to ¼ inch thickness.

Cut each lump into a 6 to 7-inch circle and bring the circles to the cookie sheets.

Drizzle just a tiny bit of cream over the filling. Dampen the edges with a bit of water and fold the pies into half-circles. Press the edges together with a fork. Brush the tops of the pies with cream.

Use a skewer or chopstick to poke a steam hole in the top of each hand pie. Having four to a large cookie sheet, place the pies on racks situated in the center of the oven.

Bake for 20 minutes, switching the racks midway through. If the pies are not golden enough for your taste when the juices start to bubble from the top steam vents, turn the broiler on and finish them to a golden brown. WATCH THEM CAREFULLY …

Let the pies cool for 20 minutes before eating … they are incredibly hot! 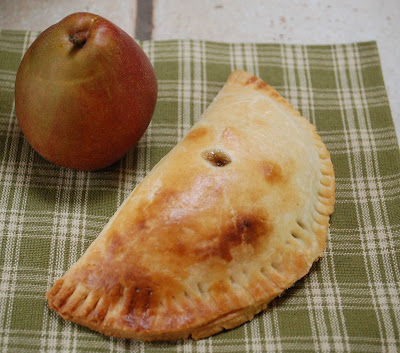 I broke down and had a Seckel pear to round out lunch. Then, I had another glass of wine and headed for the computer.