“My cuisine, I would say, is simple and sophisticated. I attach supreme importance to getting the flavours just right.” 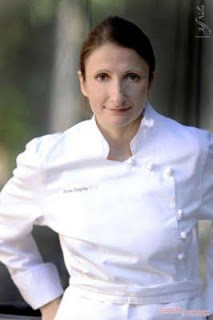 Sometimes, one must leave the realm and explore the world before returning home to make one’s mark. I think Anne-Sophie Pic might agree with this statement. She left her family’s strong culinary environment to study business and design, worked in various design and merchandising fields, and then returned to her family roots and placed her energies into becoming a world-class chef. She is chef and co-owner with her husband of Maison Pic in Valence, France and a newer venue in Lausanne, Switzerland.

Following in the footsteps of her grandfather and father … both much-lauded chefs, she has busted the glass ceiling of the French Michelin judging system … being the first woman to earn a three-star chef rating by the stodgy – yet esteemed organization.

Her food sensibilities tend toward limited numbers of ingredients, but attention to the details of bringing each ingredient’s flavour to its perfect level in whatever dish she creates.

I am attempting her Crème Caramel au Sucre Muscovado. I am not well-practiced at making custards and have never caramelized sugar on the stovetop, so here goes! I have had to translate her recipe from the French and have compared it to other recipes for flan, custard, and crème brulee … one of the problems with translation tools on the Web is that certain terms and ways of speaking do not translate within the applications, hence the need to compare her recipe and its directions to English language recipes of similar foods. I have also used the metric measurements that she stipulates in the ‘recette’. 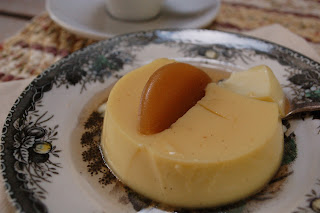 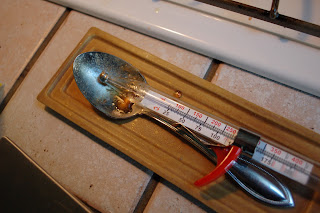 sugar at 160 degrees celsius is at hard crack stage ... hmm

1. Set 7 – ½-cup ramekins in an oblong oven-proof casserole and place them near your stove top.

2. Mix the sugars and water in a heavy saucepan and place the pan over medium high heat.

3. Bring the syrup to a furious boil and when the temperature measures
160° C/320°F, remove the syrup from the heat and pour a small amount into the bottoms of seven ramekins.

4. Set the ramekins aside to cool.

Note: Watch the sugar carefully, as it can burn very easily. You want a nice deep brown shade. It is also VERY hot, so be extremely careful when handling the pan and the ramekins. 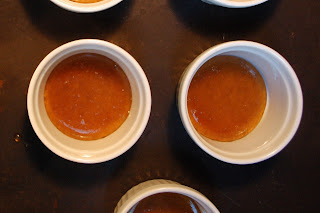 ... yes, it did solidify pretty quickly 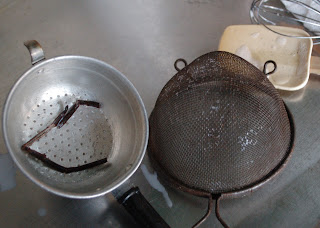 ... sieves were indespensible, but I still skimmed foam

2. Cut the vanilla pod length-wise and scrape the seeds and pith of the pod into a heavy saucepan.

3. Add the milk and bring the pan to a nice simmer, stirring to incorporate the vanilla.

4. Meanwhile, place the egg yolks and eggs and sugar into a deep bowl and whisk well.

5. When the milk has developed a skim of bubbles around the edge of the pan, remove the vanilla pod, and drizzle the milk a little at a time into the egg mixture, whisking the whole time.

6. Pour the custard through a sieve into a measuring cup with a lip, then into the ramekins, dividing it evenly.

7. Place the casserole containing the ramekins in the oven on a middle rack. Make a bain-marie by placing warm water into the oblong casserole. Bring the water level half-way up the sides of the ramekins.

8. Bake until the custard has set up, but stir trembles a bit when the ramekin is jostled ... about 25 to 30 minutes depending on your ramekins and oven.

9. Remove from the oven and cool in the water bath. When you can handle the ramekins, cover them with plastic wrap and chill for at least two hours.

10. Serve in the ramekins or run a sharp knife around the edges and flip onto pretty dessert plates (that have a bit of a lip!).

11. A pretty tea biscuit is a nice accompaniment … or a sprinkling of nutmeg and a strong cup of expresso. 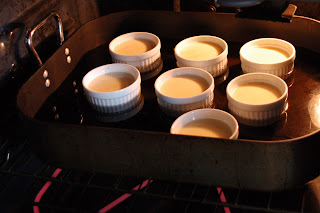 ... put the pan in the oven and then pour in the hot water ... much easier

Note: I used seven ramekins so that I could use one as my 'test' for a perfect level of 'being done'... for me touching and inserting a knife in the center to judge how 'set' the custard was. 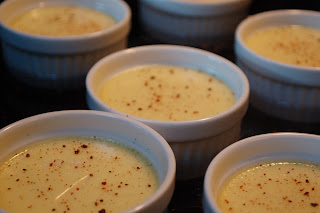 ... six perfectly set and one for testing 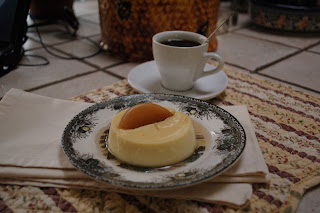 ... caramelized sugar wafer as garnish ... the rest sweetened the expresso

The flavours were right, but the aesthetic was off. Is the sugar supposed to stay hard? I don't think so ... it tasted wonderful - with the consistency of  crystallized maple sugar candy, but it didn't melt to a sweet syrup as I'd imagined. The pieces of sugar were eaten like candy and a small bit went into the expresso as sweetener ... wonderful!

The custard was as smooth as silk and the vanilla flavour was mild, but there. My little addition of a bit of ground nutmeg worked well with the custard and the syrup that drizzled down around it when I flipped it from the ramekin to the plate.

However, I think Anne-Sophie would be wagging her finger at me and tut-tutting good-naturedly. Excusez-moi, mais j'ai essayé !

See what my blogging cohorts have been posting in honor of Anne-Sophie Pic by linking to Mary @ One Perfect Bite ... you're sure to find some wonderful French fare!

Posted by Susan Lindquist at 9:37 AM