Got me a hambone ... gonna make soup and cornbread!

Yessirree! I got me a hambone ... leftovers from this past weekend's Yankee Swap and birthday celebration at the Lindquist family farmstead. Normally, I would make a split pea and ham soup because this cook loves that kind of soup, but alas ... it is the one soup that I can't get my family to eat. Sprout Kate and I are the only takers, so I've given up the fight. Since I have to please Silent Bob's palate, I am making, instead, Bean Soup with Ham and Bacon. I have fond memories of big bowls of Campbell's Bean with Bacon soup ... processed heaven right from the can with heaps of crackers for breaking into the broth. It was always a favorite for winter afternoons when the Miller kids would crowd into the kitchen after skiing or sledding. Mom used to get these over-sized 'family-size' cans and have a big pan simmering on the stove ... steamy and thick. My homemade version is much better, but the memory of the old style remains a happy one! All we need is some real snow ... someone say a prayer, huh ? 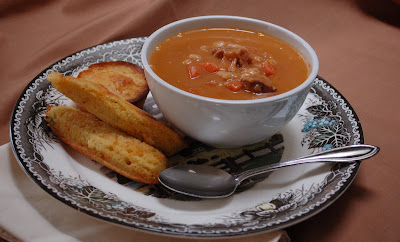 Let's talk hambones for a minute ... you want one that someone has been generous with ... that means they left a goodly amount of ham scrap on the bone and some fat too. You want your soup to have some body and that saltiness and fat helps build a good broth ... the meat bits also add flavour to the finished soup, so don't be tryin' to make this soup with some stripped bare skinny-lookin' hambone. That just won't do ... save that one for the dog. That dog will love it and you won't waste your time. Get a good generous hambone for this soup ... period.

So... this is how I do it. I make my soup in a big Vulcanware claypot (mine's 4-quart volume) that really holds the heat. You should get one ... just sayin'.  I start with a mound of mire poix (carrots, onions, celery) sweating in some olive oil until it glistens. Then, I add flakes of thyme, a few bay leaves, marjoram flakes, a bit of sweet and smoked paprika, white pepper, a couple tablespoons of tomato paste, the hambone, and enough water to almost cover the bone. The soup comes to a slow simmer and it sits there all afternoon, simmering and throwing off the glorious smell of the vegetables and salty ham.

Midway through the afternoon, I taste the broth to judge saltiness. This is important because I fortify the broth with a prepared vegetable stock paste, which can be pretty salty. When the ham bits begin falling off the bone into the stock, I remove the bay leaves, pull the meat out and chop it to small bean-sized bits, and add canned northern beans - a lot of them - three cans to be exact. Then, I let it sit a while longer while I fry up some bacon and cut the semi-crisp slices into little pieces. I take the hambone and a bunch of the beans, carrots, onions, celery, and ham pieces out of the soup with a slotted spoon and whiz the rest to a puree with my hand blender. Then, I return the vegetable mix, add the bacon, correct the seasonings and bake some biscuits/rolls. It doesn't get any better, folks ... just sayin'. Just like my memories ... only better.

Posted by Susan Lindquist at 6:07 PM