Barbara Tropp is, in my humble opinion, one of the finest interpreters of Asian cuisine that America has ever seen. Her two cookbooks are incredible references - the first The Modern Art of Chinese Cooking - Techniques and Recipes has been an invaluable tool for me, as I have learned about Chinese cuisine. The second The China Moon Cookbook has challenged me to find ingredients and dedicate myself to the recipes that I've chosen to make ... there are usually multiple steps, interesting ingredients, and new techniques for me to play at.

Ms. Tropp lead a whirlwind professional life as a restauranteur, a culinary teacher, a cookbook author, a contributing writer for news and food media, an advocate for young women chefs. Her death in 2001 of ovarian cancer came after a lengthy battle with the disease and was a real loss to food culture. Had she beat the 'wolf at the door', I'm sure she would have continued creating interesting fusion foods that incorporated classic techniques, new food trends, and the freshest and best ingredients. She'd have continued teaching young and upcoming chefs the tricks of her trade and sponsoring young women chefs as they made their way up through the professional culinary ranks. She was a remarkable woman with real talent. 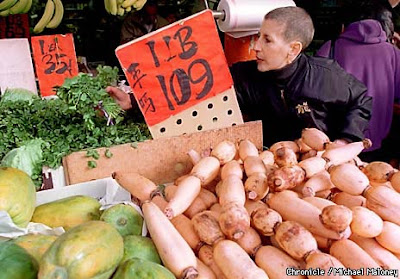 That's all I'm going to say about her ... other than the fact that I have never had a better springroll than at her San Francisco restaurant, China Moon. 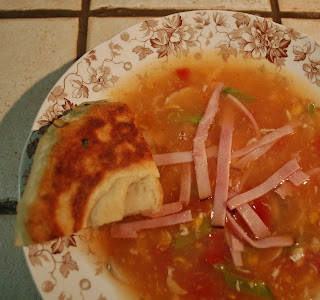 Today, I made Wine Explosion Vegetable Chowder and Pan-Fried Scallion Breads for dinner ... in tribute to Barbara Tropp, # 30 on Gourmet Live's 50 Woman Game-Changers ... link up at One Perfect Bite to see what others have to say about Barbara Tropp and check out her dishes. There must be at least a dozen other bloggers who have taken Mary's challenge to honor these 50 women by reading up on them a bit and then cooking someof their dishes.

Wine Explosion Soup has the same smooth and silky broth of a Sweet and Sour Soup, but it's much softer a flavor. There is a hint of sweetness to the broth from creamed corn and a tart tomato flavour that competes with the corn. Under it all is a hint of sherry in the tomato and chicken broth. Mushrooms and bits of snap peas offer a bit of crunch and swirled egg threads give a finishing touch to the broth. The soup is topped with little julienne strips of smoked ham . It's quite the interesting soup ... not my favorite, but I think those who like sweet and soup or other smooth creamy Asian soups would like it.

The Pan-Fried Scallion  Bread was also an interesting challenge. This is a cold dough/hot dough bread combination. 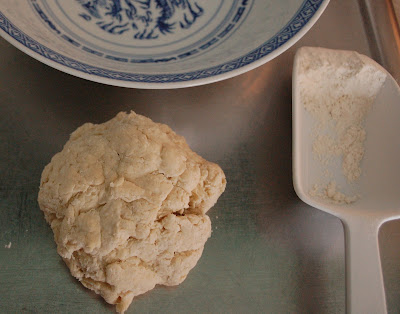 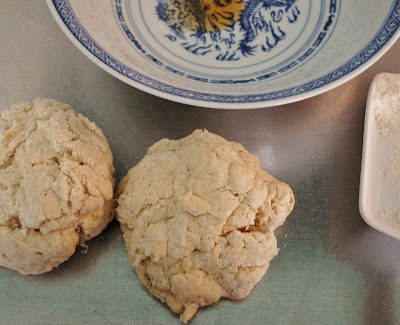 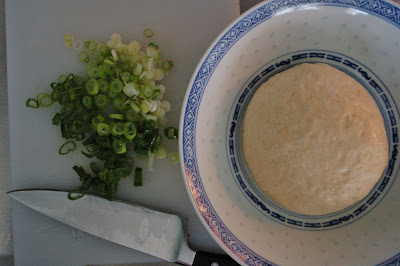 Both doughs are combined and kneaded for ten minutes with a minimal amount of flour added to keep the dough from sticking to the surface and your hands. It becomes a smooth and soft dough that feels 'like your ear lobe'.﻿ It rests for a couple hours and then gets rolled out into one big circle or two smaller circles. I opted for two. 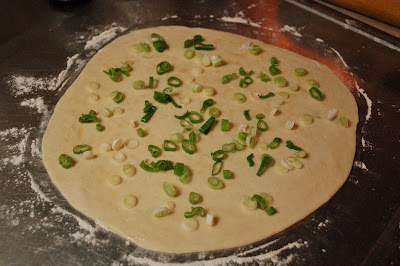 Each circle gets doctored with a brushing of sesame oil, kosher salt, and sliced scallions. 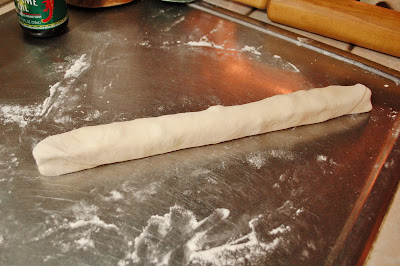 The circles get rolled up jelly-roll fashion and the seams are crimped closed. The rolls are stretched to about 14 inches long and then rolled into spiral snail shapes. 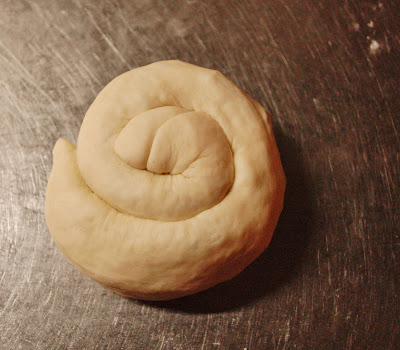 Voila! But, wait! Then, the snail gets flattened to a diameter of about 8 inches ... like so. 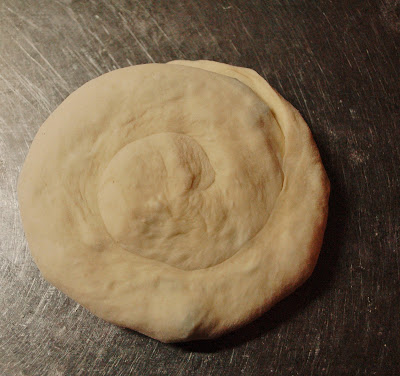 And THEN it gets fried in a very hot and shallow covered pan of peanut oil ... about 4 minutes a side. Then placed on a warm platter and kept in a hot oven for a few minutes to finish things off while you plate the rest of the meal.

When you serve it, you cut it into wedges and serve it hot with a soup or stew. 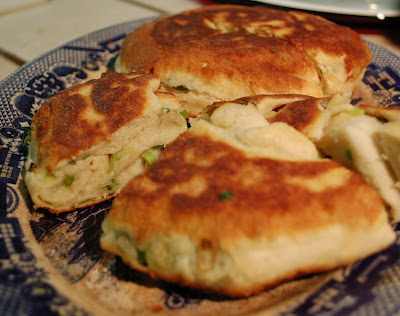 My thoughts on this bread ... make a dipping sauce if you have the plain scallion bread or jazz up the inner goods with a handful of minced ham or Asian seasoned and cooked pork. It's a very plain bread that reminded me of pancake batter bread ... good, but in need of supplements.

I knew this dinner would challenge SB, so I made him a batch of Wontons in a Stir-Fried Sichuan Sauce. This is a much more traditional appetizer dish for him and it took the edge off having a more unconventional dinner. After all, the cook has to keep the guy happy! 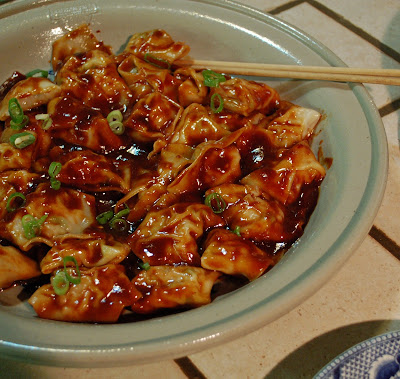 Served piping hot with black tea  ... it was an Asian feast tonight, courtesy of Barbara Tropp.

All these recipes were quite involved, so I'm opting out of printing them ... if anyone is interested in having them, email me and I'll send you copies. Until next week ...