My Love Affair with Nigel Slater ... 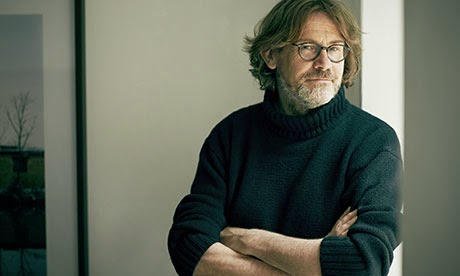 It all started when I got a copy of Nigel Slater's memoir called Toast out of my little public library. I curled up with tea, toast, and Nigel's memories. You've gotta love a kid that truly appreciates food and the making of food, and the sublime sensory imprints that certain foods put on the brain and the heart. I was immediately smitten with Nigel and left that book happy for him when he made the move away from his 'oh so English, stuffy, backwater home' and out into the world. 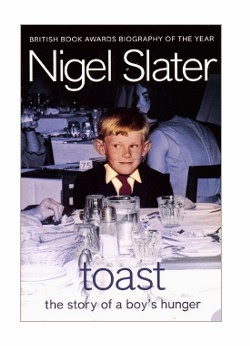 Then, the movie adaptation came out and of course, I viewed it. And guffawed at Helena Bonham Carter's sassy ass sashaying around the house and bending over that oven door. A sweet adaptation that hit all the highlights, but the book was better and that's all I'll say on THAT.

And yes, on further investigation, I learned that Nigel Slater turned out 'just fine'. Take the boy out of a stiff and stifled family life, let him spread his wings...  and it's amazing the wonderful things he can accomplish! God, if Nigel Slater EVER reads this post, I hope he doesn't take offense at my overly frank impression of his early life. That being said, he has gone on to much better and more fulfilling things than trying to outdo his father's second wife in the kitchen.

Anyway...
I've since looked at a couple of Nigel's cook books and investigated his various columns and television spots and I have fallen in love with him. Oh no! Not like that! I mean that I have fallen in love with his casual and no nonsense approach to food and cooking and his waste-not-want-not approach to using leftovers, and his honest appreciation of certain foods and products that will make his recipes 'just perfect' for his tastes. I also like the fact that he encourages readers to use his recipes as a jumping off spot for making their own adaptations. To boot, I got his Notes From the Larder for Christmas and have been slowly reading and savoring a bunch of his recipes and admiring his writing style. 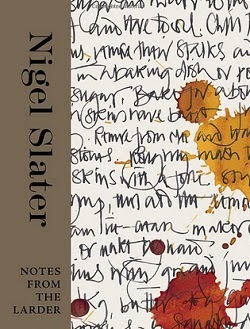 He's quite the guy, in my opinion. That being said, I've decided to concentrate this year on Nigel Slater and his approach to cooking ... between him and Diana Henry, another Brit food writer that I adore, I will be eating very well in 2014!

If anyone would like to cook along with me, the thought is to concentrate on themes during each month. For January, I'm going to go with 'Asian Flavours' ... if I find there's interest across the blogging community, I'll work up an end of the month round-up and post links to your Slater dishes. Let me know of your interest (by commenting one way or the other on this post) and post a link to your Slater recipe (or adaptation) in the comment section.  I'll take it from there!

Posted by Susan Lindquist at 9:35 PM