Rattling Those Pots and Pans ... 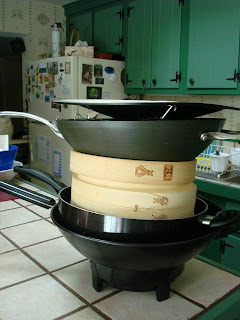 The spinach is looking really good this week and I have some pork in the freezer that's a prime candidate for a savory four spice pork stirfry. My constant fight to eat less carbohydrates will lose the battle tonight, because the only thing that really sets off this dish is a cushion of pot-browned noodles ... a dish of cold pineapple to cleanse the palate and cool off the tongue from the spicy hot chili sauce will be a nice foil... 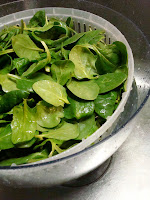 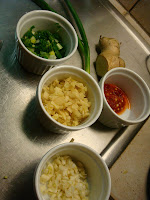 Preparing this dish, I always wonder what we ever did without my wok. Woks, I should say... I started out long ago with an electric version. I know now that it was an inferior substitute for the real deal, but I can't fault it too much, as it got me through the first stumbling attempts at meat and veggie stir-fry dishes, and tempura deep-frying. In fact, I've kept the electric woks ( I picked up a second one along the way.) around for frying and steaming purposes when I've wanted to do a multi-course Asian meal. It helps to set one aside on the counter for frying up wontons, doing tempura, or steaming dumplings while the conventional wok is on the stove fire doing the main dish. The other tool that has helped me out is an oversized non-stick frypan that has a flat surface and deep sides. It comes in handy for pot-browned noodles or pot-stickers.

Now, I DO go on about pans , but I do this because I want to make the preparation of an Asian feast an easier thing to negotiate, should a new reader decide to go for it. The New Year celebration has just passed and  I don't know about you, but all those dumplings and wontons, and scallion cakes, and savory stir-fries look so wonderful that it's inspiring to the home cook who has the food sources nearby. Having the food is just the first step, though, having the right tools for the job is the next thing. Then, just screw up the courage and dive into the slice and dice of recipe prep, pay attention to the timing of the different dishes, and have a grand time creating an Asian feast. You will gain a new appreciation for the dishes and their cooks when you find yourself in a restaurant ordering Crab Rangoon or Potstickers, or Four-Spice Pork with Spinach, or, or, or...


Four-Spice Pork with Spinach
courtesy of The Modern Art of Chinese Cooking – Barbara Tropp
recipe has been adapted slightly
Ingredients:
½ lb. boneless pork loin, trimmed of all fat and sliced into thin 1-inch by 1/8-inch pieces

Toss the meat and the marinade ingredients in a glass bowl, making sure to coat all sides of the pieces. Cover and set aside for 1 hour at room temperature.

Prepare the aromatics and have ready by the wok in a small bowl.

Prepare the sauce and have near the wok in a small bowl.

If you are serving this dish with Pot-Browned Noodles, begin stir-frying when you have flipped the noodles over. Otherwise, begin about five minutes before you wish to eat.

Heat the wok until hot, add 1 –2 tbsp. of the oil and tilt to coat the wok. Add the spinach and toss to wilt it, stir-frying quickly. Cover and steam for 1 minute. Remove the spinach to a serving bowl and set aside.

Return the wok to the heat and re-heat. When hot, add 2 tbsp. of the oil and add the aromatics, stirring and tossing for about 10 seconds. Let the aromatics froth up, but not brown.

Quickly stir in the pork and stir-fry until the pork is almost completely grey. Return the spinach to the wok and stir-fry to combine for about 30 seconds. Add the sauce ingredients and bring to a boil and serve immediately.

Plate on a serving platter right away so as to not overcook the pork. If serving with the Pot-Browned Noodles, place the cushion of noodles on a large platter and spoon the Four-Spice Pork over the noodles. To serve, cut the noodle cushion into wedges and serve with the pork and spinach on top of the wedge.

Heat a pot of water to a rolling boil.

Add the noodles and break them up with a fork. Cook for 6 minutes.

Drain the noodles and then place them on a lint-free towel to soak up all water.

Turn the noodles into a large bowl and toss with the sesame oil and the kosher salt. Make sure the noodles are well-coated.

Heat a large non-stick fry pan until hot (medium-high). Add 3 tbsp. of the oil and tilt the pan to coat the lower surface and up the sides.

Starting at the outer edges, stretch clumps of the noodles around the edges and toward the center of the pan to form an even layer or pillow of noodles.

Jostle to settle the noodles and allow them to brown without disturbing (5 – 7 minutes). Use a couple flat spatulas to periodically check the browning process. Regulate the heat appropriately.

When the layer is browned and golden over the whole lower surface, use the spatulas to flip the pillow.

Drizzle the rest of the peanut oil around the edges and jostle the noodles until it settles into and down under the pillow.

Continue browning without disturbing until the lower surface is browned and crispy- looking (another 5 minutes or so). If stir-frying, start your stir-fry about now.

Slide the noodle pillow onto a lipped platter and top with your meat or veggie stir-fry, cut the pillow into wedges and serve with the stir-fry and sauces on top of the wedges. 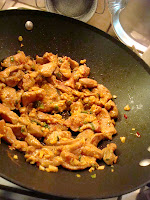 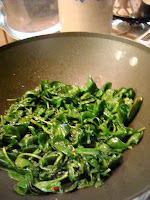 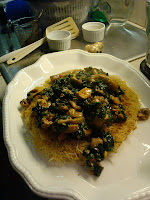 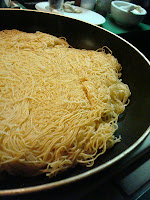 Posted by Susan Lindquist at 1:18 PM 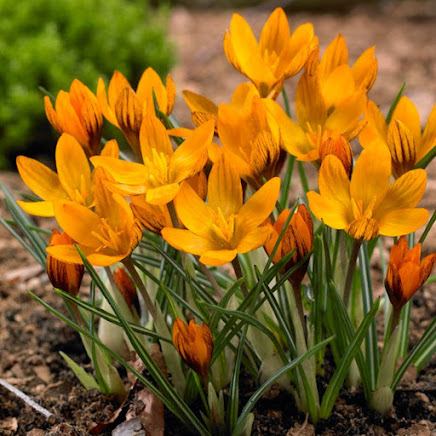