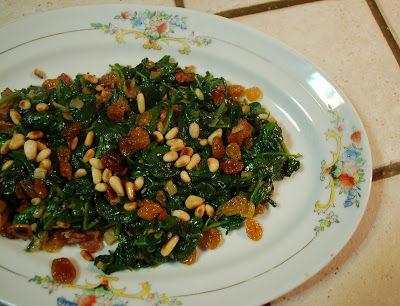 Jazzed Up Spinach!
A while ago, I happened on this wonderful cook book that was put out by The Culinary Institute of America and dedicated to vegetables. I have been slowly wending my way through the book, trying different recipes and finding that some are definitely keepers. Take this spinach recipe ...it's chock full of flavors. Just look at the list of ingredients! There are sweet, salty, garlic-y, and nutty flavors that mingle with the green and astringent flavor of the spinach. Perhaps I am so enthusiatic because spinach is my favorite dark, leafy green.

Who knows, but look out, Popeye! You're in for a burst of nutrition above and beyond that plain old can of power! 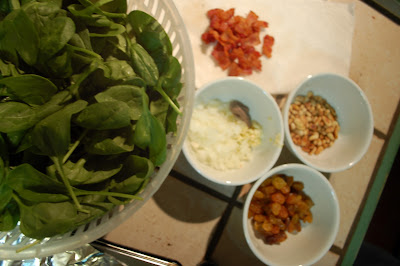 Wintertime light  makes for horrible photography ... sorry!
I had to play only a little with this recipe. I halved it for one thing and I used anchovy paste instead of the one lone anchovy fillet. Other than that, I made it to the specs of the recipe. Oh, okay. I was more generous with the raisins too. ﻿ 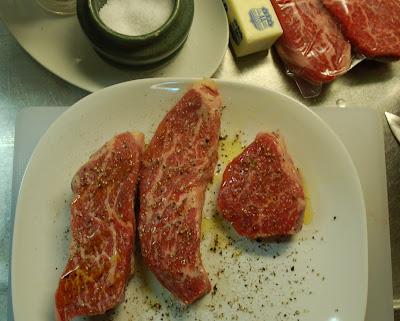 Major marbling going on in these steaks, but they were tender!
Because Silent Bob and I came in late from a movie, ... new Harry Potter, woot, woot! ... I was all about keeping dinner really simple and fast, so I rubbed up some sirloin steaks with olive oil, kosher salt,  and pepper and did a fast broil. While the spinach wilted, I browned up mushrooms for the steaks and cracked a bottle of wine. 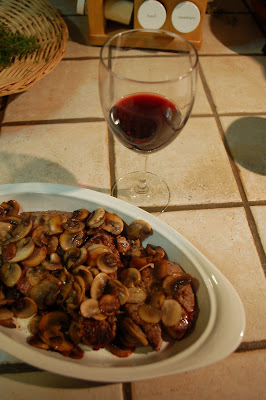 1. Dice the pancetta or bacon and brown until crispy in a large sauté pan.

2. When bacon is crisp, add the olive oil, minced onion, garlic, and anchovy and sauté until the garlic smells heavenly.

3. Add the spinach and toss the aromatics to incorporate them. Continue sauté for about 3 to 4 minutes until the spinach is bright green and thoroughly wilted and hot.

4. Toss the most of the raisins and pine nuts in and turn to incorporate.

5. Choose a pretty platter to present the dish, turn the spinach onto the platter and sprinkle the rest of the raisins and pine nuts over the top. 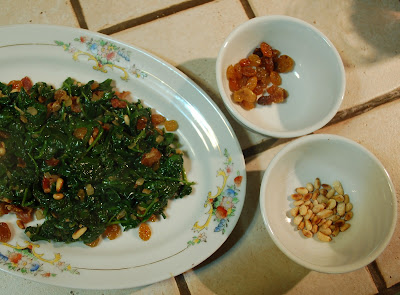 Posted by Susan Lindquist at 9:13 AM